There is constant debate about screen time for children.  Some say no screen time, some say a little is okay.  If you are allowing your children to watch television, why not let it be educational?  Here are five television shows your children can watch while learning to read. 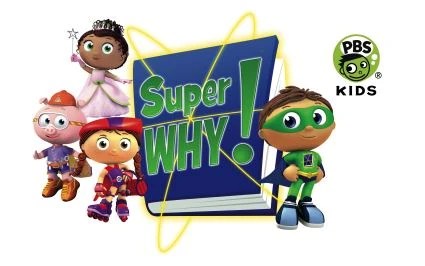 Super Why! Has four main characters and all of them have a literacy “power” that helps them solve a problem in each episode.  Princess Presto has spelling power, Wonder Red has word power (rhyming), Pig has letter power and Whyatt has the power to read.  Whyatt usually does sentence completion activities and changes the outcome of popular folk tales and stories.  This show is excellent for beginning readers as it covers letter recognition, phonics and spelling in a fun and entertaining way.

This 3-D animated series turns each character and object into a word.  You can see the spelling of each character and object in their design.  This show also covers both spelling and phonics.  When characters in the show want to have something, for example a pie, they search for the letters to “build a word” and once they have all the letters, they put them together and the object appears.  Most of the words that are built are spelled out. However the show also emphasizes on phonics.  One episode for example, focused on the “sh” sound, and centered around a shark who had a hard time making friends.

I mentioned the classic version of  this show in my post about classic TV shows that are streaming on Hulu and Amazon.  However there is also a new modern version that is currently airing on television.  The current version of The Electric Company has the same focus and goals.  The entertainment is geared toward a crowd older than Sesame Street that needs a boost in phonics. One of my favorite clips is the song about silent “e.”

Word Girl, as implied by it’s title focuses on words and vocabulary.  Word Girl, who is an alien with super word powers was born on the fictional planet Lexicon.  Each segment begins with instructions for the viewers to listen for key words that will be used through the episode.  Words such as “diversion, ” “cumbersome, ” and “idolize” are introduced, defined and applied throughout the episode.   Although this show is geared towards children ages 6-9 older and younger children can appreciate it as well.

No children’s show list would be complete without this classic.  Parents who watched the show as children probably remember that each episode was “brought to you by the letter ___ and the number ___”  now in addition to letters and numbers, they also have a segment called the “Word on the Street” that helps children define more complicated vocabulary words.   Always current, fun and entertaining, Sesame Street continues to be the standard in educational television.

All of the above shows air on your PBS stations,   check your local listings for dates and times. Mommies do your children watch any of these shows?  Are there other educational shows that you watch that are not listed here? Do you require that a portion of their media be educational?  Please share.

Angele is a wife to a wonderful creative husband, mother to two beautiful intelligent daughters and a lover of art, education and laughter.  She is the creator and author of ABC remix.